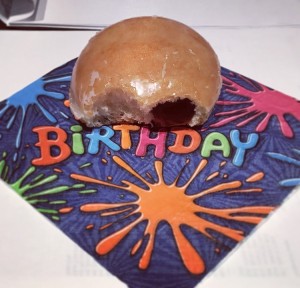 Lord willing my 40th birthday is coming up this week.  Ten years ago I expected to be in a big ball of tears, curled up in the fetal position dreading the day that another milestone birthday was knocking on my door.  But I can honestly say that isn’t the case for me as it’s looming on the horizon.  I’m not shuddering at the fact that I’m one step closer to the AARP knocking on my door and pamphlets for hearing aids filling up my mailbox.  (Who am I kidding….I’ve been getting mail from both of those places since I was like 27!!).  I’m luckily not struggling with a midlife crisis, I’m not waking every morning and staring at myself in the mirror pondering the age old question “What are you doing with your life?”.

What am I doing instead of worrying about adding another number to my age?  I’m making memories full of color and life and people.

Back in January I decided I wanted to have a party for my birthday.  If you know me this is the EXACT opposite of things I like to do.  I’m a homebody who enjoys hanging out at home, talking to my dogs and staying away from the rest of the world.   Parties = People   And people, well they can sometimes be a handful.  Plus they look at you all weird when you say things to them like “If you sit I’ll give you a treat” or “Do you need to go outside and go potty?”.  Either way once I ran said party idea past one of my sisters and then told my folks about it I basically committed myself to it happening.

Over the last couple of weeks every single person I invited to this party kept asking me what they could do.  They volunteered to set the menu, arrange group emails and text messages, to do all the cooking, to set up and decorate.  To basically do it all since it was for my own birthday.  Those closest to me know I am a big procrastinator and more of a last minute, go by the seat of my pants type of planner so their offerings of help were out of love and and probably precaution. LOL!  But instead I declined their help just asking them to show up today at my church for Worship and join me for a luncheon afterwards bringing any food they wanted knowing in my heart it would all work itself out and be perfect.

In just the last couple of days two of my closest friends both asked why I was doing all of this work myself.

The answer is simple really.

It’s because of Him….that’s why!

It’s because of Jesus, and the cross and everything those two power symbols represent. 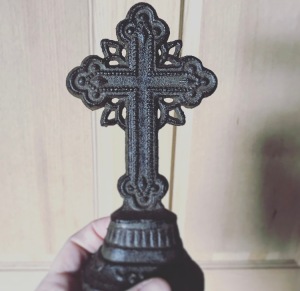 Because of Him, I will plan and cook and run around like a mad woman roasting a turkey, pulling pork till my arthritis is laughing at me, and burning my mouth on chicken and noodles to make sure they taste just right.  I will decorate until way past dark even when my feet tell me they can go no further after standing for almost 2 days straight.  I will wake up at 4:30am after losing an hour of sleep, to finish the preparations in order to serve those I love the most in this world.

At the end of the day, that is what He has called me to do.

Today was absolutely wonderful.  I couldn’t have picked a better day to have a party in my opinion.  To be surrounded by those who have brought me into this world and survived my tumultuous younger years with.  By some that I am lucky enough to share a name with, and those who have come into my life here or there and touched me in the joys of friendship.

But it isn’t just the easier, once in a blue moon type of opportunities that God calls me to be his servant.

It’s all the other 364 days of the year as well that are chalked full of people and unscheduled occurrences.  You know, the ones that some days you barely feel like you’ll survive and see the dawn of a new day.  The days that get under your skin and can grit you raw.  The ones that are filled with work and deadlines and adult responsibilities.  With bills and repairs, and unforeseen costs.  With screaming kids, unhappy co-workers and maybe untrustworthy spouses.  With pain and toils, worries and regrets, with sorrow and grief and everything else that life can throw at you.  Those are the days the last thing any of us want to do is help out another human being.  To serve someone else, especially if in our own eyes we don’t think they deserve it.

Those are the days I want to ask why also.  To turn away from what He has called us all to do and put myself first and not deal with people and all that they entail because it’s hard.  Really, really hard.

But because of Him and the Cross and the promise of an eternal future far beyond anything my human mind can comprehend….I will keep trying every day to do what He asks me to do.  Even on the hard days when I don’t think I have it in me.

This past year or so has brought many unexpected occurrences with people in our daily lives at the farm.  Some nights it feels like we have a revolving door with people coming and going.  It’s lead me to think about what compassion really looks like and how it so often ties in with grace as well.  No one said being a servant would be easy.  Tom and I have had many, many long conversations, some days even in tears about how hard it is to help people.  I’ve told him numerous times it’s so much easier for me to give to strangers then those that are closest to us that need help.

Some of the days have been costly.  It has cost us time, and some times our finances and we all know those are two things that mean a lot to everyone.  But it hasn’t stopped us yet from serving God and trying to help others who are less fortunate or are simply straight up lost in this world at the moment.  Why?  Because of Him and the compassion, grace, mercy and forgiveness that comes with His blood being shed on the cross.

When I’m exhausted at the end of a long days work and can’t wait to go to bed and the door barges open from our alcoholic friend stumbling into the kitchen, I will serve him because of Jesus.  I will stuff the anger of the disruption down as much as I can knowing there is a time and place for such interventions.  I will fix him a pot of noodles with love and make sure he has a place to lay his weary head and lost soul for a night or two.  Because right now we are all he’s got.

We joke our kitchen should just be deemed a soup kitchen and our laundry room community property but sharing food and laundry detergent is such a minor way to help a person out.

When someone is short on cash one month I’ll buy them groceries or gas cards.  This past year I offered to fund someone’s Christmas shopping.  I wasn’t sure how I would even make it work but I figured God would make it possible.  I spend a good chunk of the year out in the garden growing food in surplus that I can harvest, freeze and can and give away as gifts throughout the year.

When I’m sitting in the parking garage before work just a few days before Christmas in my new to me/used vehicle, enjoying my heated seats while listening to music that will soon be streaming from my brand new iPhone 7 still sitting in the box and a kid knocks on my window begging for money for the bus, what does God tell me to do?  He tells me to serve him and not lie that I don’t have anything on me and instead give him the only cash I have on me.  A crisp $100 bill.

And then there’s my wonderful husband who has a much more compassionate heart then I do and some days spends his time being an uber driver, a counselor, a foreman, a mentor and a listening ear to people who just need to know someone cares about them all while he’s trying to accomplish his own work around the farm.  Just today after our party he was able to find a trucking company that will haul a surplus of hay we have laying around the farm to the cattle ranchers down south who have had their grounds, livestock and livelihoods devastated by the wildfires.  I feel it’s just a small way we can bless someone else’s life after all God has given us.

It’s taken me a long time to stop questioning God and asking the Why every day but in doing so he has brought so much joy into my life that I never realized was missing and it has been like a party every day.  That’s why I’ll continue to serve Him all the rest of the days of my life.  Here’s to the next 40!

My only regret from my party planning.  I should have invited more people.